The Mercian Regiment was formed on 1 September 2007 at Tamworth Castle in the presence of The Colonel in Chief, His Royal Highness The Prince of Wales, Earl of Chester, KG KT GCB OM.

This formation saw 3 Regiments, each with more than 300 years’ loyal and professional service to the Crown, merge into the infantry’s newest regiment.

The regiments that formed The Mercian Regiment are:

The Worcestershire and Sherwood Foresters Regiment

In 2014, the Changes under the 2020 Defence Reveiw saw the Mercian Regiment move from three regular battalions to two.

1 MERCIAN is an Armoured Infantry Battalion that is part of 1 Mechanised Brigade based at Bulford on Salisbury Plain. The Battalion has deployed on three operational tours since its formation, one to Iraq and two to Afghanistan.

2 MERCIAN is a Light Role Battalion that is part of 42 Infantry Brigade, based at Weaton Barracks, Blackpool. The Battalion has deployed on three operational tours to Afghanistan, and a UN peacekeeping mission to Cyprus.

4 MERCIAN is an Army Reserve Battalion with its Headquarters in Wolverhampton and numerous Platoon and Company locations across Mercia.

The Mercian Regiment is one of the most operationally experienced Regiments in the British Army today, having been deployed on operations eight times since its formation in September 2007.

32 soldiers were killed in action whilst serving with the Mercian Regiment on Operations in Afghanistan (from 2007 to 2014). Over 150 soldiers suffered life-changing injuries during the campaign. 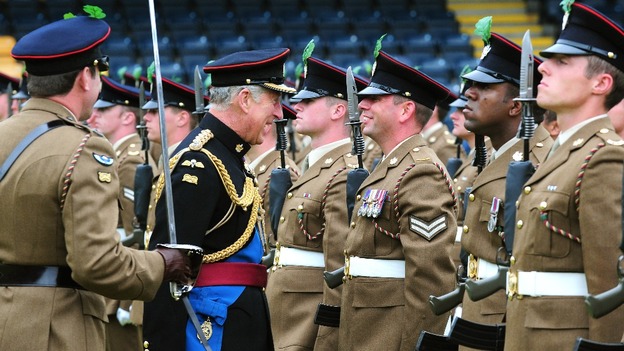 HRH at the Formation Parade